TODAY WE WILL PREVIEW THE WILD BREW YONDER TOUR, AN ADVENTURE THAT TAKES OFF EACH SATURDAY AFTERNOON FROM THE CRAFT BEER CELLAR FORT POINT.

Inspired by a song originally written by Robert MacArthur Crawford in 1938 for the Army Air Corps, the Wild Brew Yonder Tour explores two breweries that are each under six months old, and another that has just opened.

On this tour we will visit Lamplighter Brewing in Cambridge, Exhibit ‘A’ Brewing Company in Framingham, and the brand new Springdale Barrel Room which is also in Framingham

As with all of our public tours, we will begin and end at the Craft Beer Cellar Fort Point, a convenient location near plenty of parking and a handy T stop.

Let’s take a check out each of the breweries on this tour: 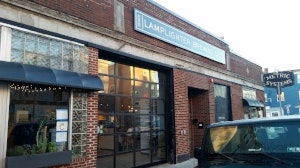 The first stop on the Wild Brew Yonder Tour is Lamplighter Brewing Company. A.C. Jones and Cayla Marvil met in college, bonded over a mutual love of home brewing, and ended up in Cambridge together after three months of brew training at the Siebel Institute in Chicago.

In 2016, they created just the second brewery in the city of just over 100,000 people by converting a former auto repair garage into their brewing facility and taproom. 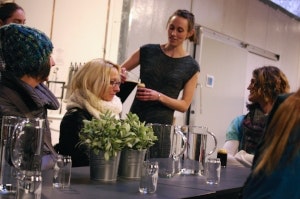 With a name inspired by the gas lamps found throughout Cambridge, Lamplighter has become a community-forward and inviting space with coffee and pastries by day and a lively taproom by night. Take a special look behind-the-scenes look at their business and find out more about their vision for innovative and tasty beer. 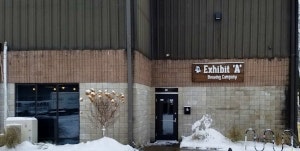 Next, we head to Framingham to visit Exhibit “A” Brewing Company. Matthew Steinberg has been brewing beer professionally for nearly two decades, now he has opened his own brewery in a space with very good beer karma. Exhibit “A” is located in Jack’s Abby’s former brewery space in Framingham.

The 12,000 square foot facility features a 20 barrel brewhouse that will turn out various styles of well-hopped beers. And the cozy tasting room has a sleek modern feel appropriate for the updated use of the space. 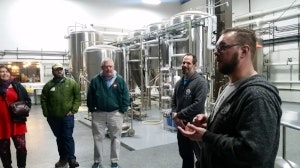 Be sure to look for the Demo Tape series beers, these are test batches in which the team is honestly looking for your feedback. 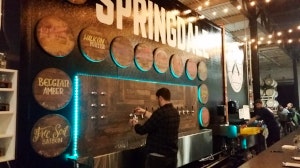 There are thousands of oak barrels containing unique ales and lagers that are undergoing fermentation by a horde of yeast and bacteria. Many of their beers are fermented with classic ale yeast strains, rather than the parent brewery’s well-known lager yeasts. These yeasts express themselves in the beers with spicy, fruity characteristics that are classic in many styles. 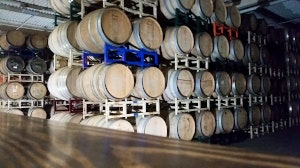 Blending these barrels into funky, complex and sometimes sour beer is a true art form that we will get to enjoy as we learn more about their activities in their vast tasting room.

Tickets for the Wild Brew Yonder tour are on sale now!

Don Littlefield is the General Manager of the Mass Brew Bus. He enjoyed a Sebago Brewing Company Barleywine while preparing this post. Twitter: @MassBrewBus