We started our adventure in Boston, the birthplace of the American Revolution, and end in the former Province of Massachusetts after visiting four very different breweries.

This was the beginning of the Brew England tour that is currently underway as part of the American Experiences offerings of TourMappers North America.

Our group had assembled at the Aloft Boston Seaport the night before in order to meet each other over a drink. We shared to the overall plan for the tour, including where we will be visiting and what we will be doing. 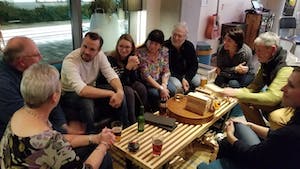 As the tour guide, I tried to be pretty clear that the first day was a long one.

We started with a driving tour of historic Boston. Boston is Massachusetts’ capital and largest city. Founded in 1630, it’s one of the oldest cities in the U.S. The key role it played in the American Revolution is highlighted on the Freedom Trail, a 2.5-mile walking route of historic sites that tells the story of the nation’s founding.

We didn’t actually walk the Freedom Trail, but we did cover many of the sights along the way. From the North End we went to Charlestown Navy Yard and the Bunker Hill Memorial. Then over the Zakim Bridge past the Boston Garden and through the heart of Downtown. We talked about the site of the Boston Massacre in front of the Old State House, and drove past the colonial burial grounds of so many of Boston’s patriots.

Back Bay was up next, and we made sure to drive by Fenway Park, the oldest ballpark in the country. Of course, that led us over the Charles River to Cambridge, and then back to Beacon Hill. Our last stop was at Quincy Market, where our group from Europe and the U.S. could stretch their legs with a bite to eat or a souvenir.

After that, it was time for beer! So we headed to Smuttynose Brewing Company on the historic Towle Farm property in Hampton, NH. 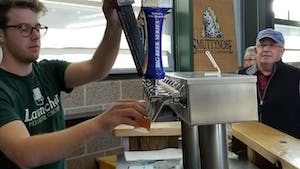 We were given a welcome beer and taken on a great tour of the facility, after which our group could select four additional beers to try as they wished. 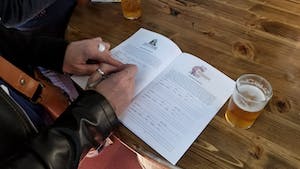 Making notes in their beer passports they were able to record their different beers and how they enjoyed the flavors.

It was definitely time for lunch (and more beer), so we made our way over to a different part of Hampton to visit Throwback Brewery.

Co-founders Annette Lee and Nicole Carrier opened Throwback Brewery in 2011 in as small industrial space in North Hampton. In 2015 they moved into the into Hobbs Farm, which includes a historic barn and 1860s Victorian farmhouse, that had belonged to one family since the 1800s but in recent years had fallen into neglect. 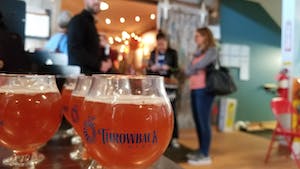 The historic barn has been renovated and preserved to serve as the home of the new brewery and a 70-plus seat taproom and restaurant, while a beer garden operates outside. They grow produce on site that is used in the restaurant, with two full-time farmers on staff.

Nicole was amazing with our group as she told the story of their beginnings and of their growth. She had selected a great range of beers for the group to try, including a Wit enhanced by local beets and a honey oatmeal stout. 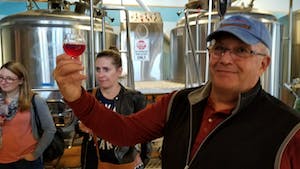 These beers worked well with the delicious lunch, which was universally enjoyed by all.

It was time to leave the farms and head to one of the fastest growing breweries in New Hampshire, Stoneface Brewing Company in Newington. Founded in 2013 by Erol Moe, Peter Beauregard and Tim Finelli, they recently have taken an additional space in their building for a new taproom, full restaurant, event space, and packaging facility. 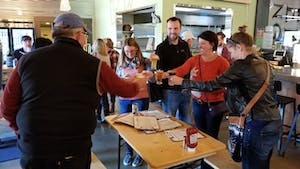 The name Stoneface is a reference to The Old Man in the Mountain, and the company’s logo features a leafy hop cone with the profile of the famous rock formation.

We were shown around the brewery and made note of the impressive canning line and the ability for the young brewery to increase production even more. 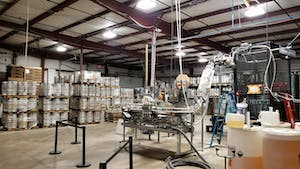 It was then time to head across the Piscataqua River to visit Tributary Brewing Company in Kittery, Maine.

Founded by brewing veteran and craft beer legend Tod Mott and wife Galen in September 2014 in Kittery, ME, the brewery name and beers are inspired by the landscape of Southern Maine and the Mott’s passion for the environment.

Even if you don’t know the name Tod Mott, you’ll know his handiwork. He’s the brewer who devised the Harpoon IPA recipe back in the early 90s, then went on to run the brewhouse at Portsmouth Brewing Company for many years, developing a well-respected Russian Imperial Stour recipe along the way. 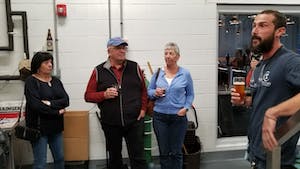 Thanks to lead brewer Ian we were able to learn more about the company and their inspiration for creating their popular beers. The group enjoyed samples of Octoberfest, a hoppy Pale Ale, and even a stout that uses live Oysters as part of the recipe! 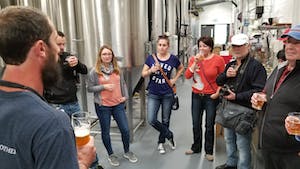 After that, it was a good time for everyone to stretch their legs so we headed into downtown Portsmouth, NH so the group could take a look around.

Thoroughly happy with the events of the day, we made our way to our accommodations for the next couple of nights at the beautiful Meadowmere Resort in Ogunquit, Maine.

Time to rest up for the next day of our travels, it’s on to check out Portland – the beer capital of Beercationland!