We explored the rock-bound coast of Maine by heading north to Fort Williams and Portland Head Light, taking a historic tour of Maine’s largest city, and trying amazing beers in this very special place.

It was time for the second day of the Brew England tour, an itinerary that is currently underway as part of the American Experiences offerings of TourMappers North America.

We departed our fantastic accommodations at the Meadowmere Resort bright and early on a beautiful Monday morning.

It was easy to decide to skip the highway for the first part of the day, so we turned north on U.S. Route 1 and passed through coastal towns and villages toward our first spot in Scarborough.

Prouts Neck or just “Prouts” to residents, is a mostly seasonal summer community. The area itself is not completely gated, but it is well patrolled by local police – which we observed first-hand.

There are a number of antique summer “cottages” that have been in families for generations, several of which were designed by noted architect John Calvin Stevens. These cottages are unique in that many have not changed for well over one hundred years, presenting us an interesting view of a bygone era.

Famous families that have summered in Prouts Neck for generations include members of the Rockefeller family and descendants of Thomas M. Carnegie. We made note of the road that allegedly leads to a summer home for the Commissioner of the National Football League as we also talked about the Winslow Homer Studio there, overlooking Cannon Rock.

We turned north again to drive through the Higgins Beach community on our way to Fort Williams, a 90-acre park in Cape Elizabeth, Maine, encompassing numerous historical sites. Most famous for having Portland Head Light on its grounds, the park also includes the decommissioned and largely demolished United States Army post named Fort Williams, which was operational during World War I and World War II. 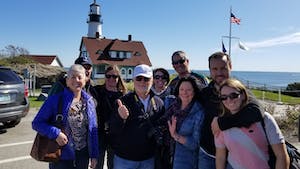 The group enjoyed time to check out Portland Head Light, the most photographed lighthouse in the country.  Commissioned by President George Washington and completed in 1791, it is the oldest lighthouse in the state of Maine. Construction took four years to complete by local stonemasons, but it only cost the young government $1,500 to build.

Today, Portland Head Light stands 80 feet above ground and 101 feet above water, its white conical tower shining a 200,000-candlepower beacon every 7.5 seconds that is visible from 24 miles away. The park grounds and the keeper’s house are currently owned by the town of Cape Elizabeth, while the beacon and fog signal are owned and still maintained by the U.S. Coast Guard as a current aid to navigation.

We cruised into Portland where I had a special surprise for the group, a Maine Brew Bus ready to go for all to transfer into for the day.

Aboard the bright green bus we traveled around the peninsula pointing out historic buildings and important areas in Portland. Up Munjoy Hill to the East End, back down through several past business districts until we reached Monument Square. Then making our way through the arts district we looked at the amazing architecture of the West End. Capping off our tour with a cruise past the Victoria Mansion, we settled in at our first stop for some lunch. 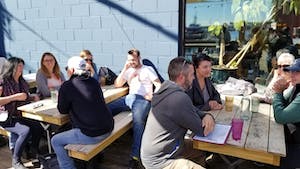 We were able to sit outside on the waterfront deck at Liquid Riot Bottling Company, one of the country’s only combinations of restaurant, brewery, and distillery in one place. The space is striking, with floor-to-ceiling glass separating the three sections so customers can ogle the producers at work.

Our tour didn’t have to watch from the outside, as Terry brought us right into the production space to learn more about the art of brewing and distillation. As the group came back outside, lunch was ready and waiting to be devoured.

After a time to visit the historic Old Port Exchange, the group was eager to head to our second stop which was opening up just for us on a day they are closed to the public. 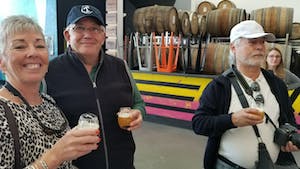 One of the most coveted breweries in Maine, Bissell Brothers was founded December 2013 by brothers Noah and Peter Bissell. Noah was a homebrewer, Peter a professional photographer, and together they went into the brewery business by taking over warehouse previously known as the birthplace of Maine Beer Co. 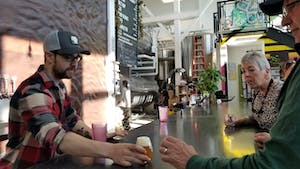 In the brief time that they have been in operation, they have grown so much that they moved the entire brewery to revitalized space at Thompson’s Point in mid-2016.

And thanks to our host Mike, not only did we enjoy hop-forward beers but we learned that they are planning to open a second location in rural Milo, Maine very soon to focus on barrel and foudre aging, wild yeast fermentation, proper lager production, and more. 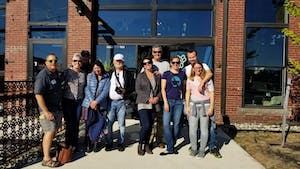 We were running a touch early to our scheduled tour at Maine’s second largest brewery, so we paid a visit to Foundation Brewing Company. 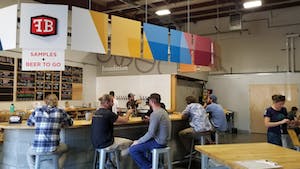 Opening at One Industrial Way in 2014, they were founded by avid homebrewers Joel Mahaffey and John Bonney. They have been able to expand their production space which more than doubled their size, and their new comfortable tasting room is where nearly every member of the tour enjoyed Epiphany, their well-known Maine IPA.

Across the street we headed for a special tour of Allagash Brewing Company. 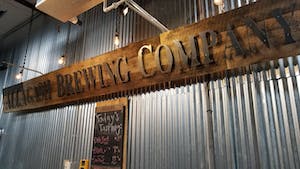 Founded in 1995 by Rob Tod, the first beer created and sold was Allagash White – which is what we started the tour off with as we learned it accounts for 80% of their business in just 17 U.S. States. They are now the 35th largest craft brewer in the country, and Maine’s second-largest brewery. 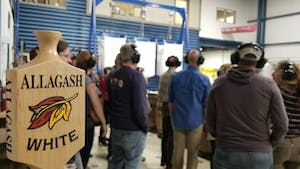 After time in their barrel room tasting some of their special offerings, we boarded the vehicle and headed to Kennebunkport, Maine.

Historically a shipbuilding and fishing village, for well over a century the town has been a popular summer colony and seaside tourist destination. Kennebunkport has a reputation as a summer haven for the upper class and is one of the wealthiest communities in the state of Maine.

The Dock Square area has a district of souvenir shops, art galleries, seafood restaurants, and more. So that’s where we took some time to explore before heading back to Ogunquit for the evening.