As we took a turn towards the North, we left coastal New England behind to explore the chiseled forms and mountain brewed beers in the Mount Washington Valley area of the Granite State.

On the road again for the Brew England tour, an itinerary that is offered as part of the American Experiences offerings of TourMappers North America.

The morning started with a beautiful walk along the Marginal Way, a 1.25-mile trail with views of the coast. The path leads from the downtown shopping area to the fishing village in Perkins Cove, now an outdoor mall of jewelry, clothing, and candle boutiques. 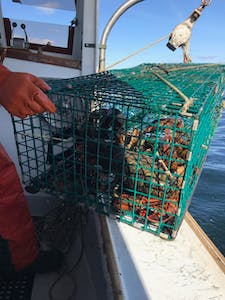 We saw see traps, or pots, hauled and lobsters caught by an authentic Maine lobsterman. Not only did we learn more about the lobster species and their habitat, we also got a detailed explanation of the lobster fishery business and saw many scenic points of interest along the way. 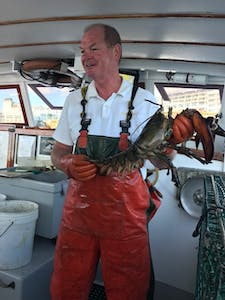 We headed from Ogunquit and took the back roads through Berwick, Sanford, and Shapleigh, Maine before crossing into New Hampshire at Province Lake.

After a quick stop to stretch our legs, we arrived in Conway, New Hampshire and our first beer stop of the day.

Tuckerman Brewing Company was founded in 1998 by Kirsten Neves and Nik Stanciu. They were 24 years old in 1998, Nik was a scientist and Kirsten was thinking about law school. They moved to the Mount Washington Valley of New Hampshire and took jobs at a local ski area and started homebrewing. Eventually, they opened their original location on Main Street in Conway.

Their company was named after the nearby Tuckerman Ravine on the southeast face of Mt. Washington, which named after botanist Edward Tuckerman who studied alpine plants and lichens in the area in the 1830s and 1840s. 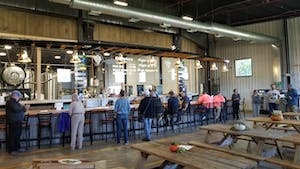 As the business has grown, they have kept moving into larger production facilities, and in 2014, they opened this production location with an impressive 5,000 square foot tasting room and tap house.

The group enjoyed samples of eight different beers all produced on site, and then took a tour with one of their production brewers. During the tour we learned about krausening, a German technique in which they add a proportion of active wort to cellar tanks containing fully-fermented beer. 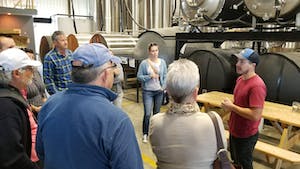 They also bottle-condition all of their beers, and both of these combined makes them unique and helps to explain their popularity for nearly 20 years.

We were able to make time for some shopping, and Settlers Green was straight ahead in our sights. Built on the site of the White Moutain Airport, the outdoor mall opened in 1988 and became New England’s largest outlet mall.

Everybody enjoyed the chance to get out and walk around on the unseasonably warm afternoon, and perhaps spend a little money at one of the over 60 retail shops in tax-free New Hampshire.

After passing through the timeless village of North Conway, we arrived at our second beer stop of the day. 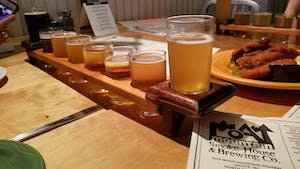 Steve Johnson started Moat Mountain Smokehouse & Brewing Company as a brewpub in 2000. He is a New Hampshire native who in the late-1990’s started Federal Spice restaurant in Portland, a location still in business that we had driven by the previous day on our tour.

While in Portland he developed an interest in brewing beer, and did some research at the Great Lost Bear where he met a bartender named Vicky…who later became his wife and business partner. 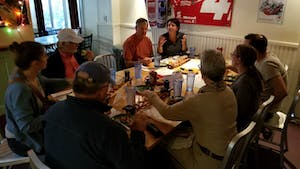 He found a used brewing system and opened the brewpub in the old Scottish Lion Inn in North Conway. They have a massive restaurant and bar with five lodging rooms upstairs – and beer brewing, canning and bottling all happening in the basement.

In the summer of 2011, they became one of the first breweries in New Hampshire to can their beer for retail sale, and they do so in very unique 24-oz cans. 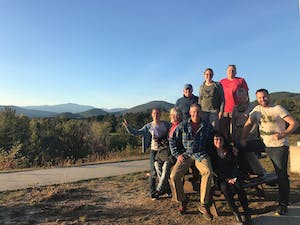 It was time to head for our accommodations for the evening, but not before making a couple of scenic photo stops in Intervale and Jackson. 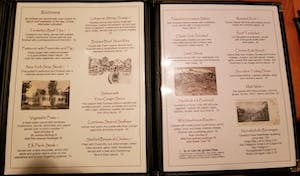 The group enjoyed a delicious and hearty dinner from a very impressive entree menu. Our selections included roasted duck, elk flank steak, roast lamb shank, roasted salmon, wild mushroom risotto, and a full turkey dinner with all of the extras.

This put the group in a good mood for sleeping, which is a good thing as we have many scenic Vermont miles (and many more beers!) ahead in the coming days.