After 5 days and hundreds of miles on the Brew England road, it was time to stay close to the charming village of Stowe and taste all that was right around us.

This is what we decided for our second to last day on the Brew England tour, an itinerary that is offered as part of the American Experiences presented by TourMappers North America.

For the first time on the trip the day opened with cloudy skies and a fairly low cloud level. This precluded our planned ascent of Mount Mansfield on the Stowe Gondola. 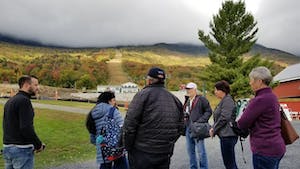 Two intrepid members of our group took initiative to rise early to hike the 3-mile trail to the top. Since they were happy on their path, they continued on and planned to meet up with us later.

We made our way off of Mountain Road into the village of Stowe. The group was given an hour to explore the stores and shops in this nice little area laden with buildings constructed in the 19th century. 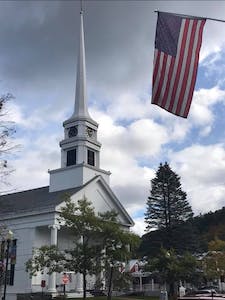 Stowe has since the 19th century been one of Vermont’s major resort centers, and its village center on Main Street is a very strong example of this past and is actually a historic district in its own right.

We all had a brunch date at 11:00 a.m., so we made our way to Stowe Kitchen Bath & Linens where we reconvened with our adventure seeking hikers.

The retail store has a demonstration kitchen used for cooking classes, and we were treated to a lesson from a local chef on using local ingredients to prepare a brunch meal the “Vermont way”. 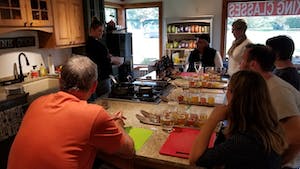 Of course, this being a beer-focused tour there was a selection of beers from the adjacent Idletyme Brewing Company. This provided a great challenge to the group, find different beer styles and flavors that would pair favorably with the forthcoming meal. 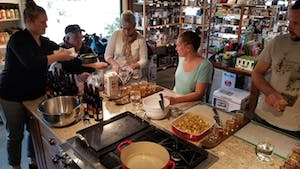 Our chef assigned roles to our group. Mixing pancake batter, chopping potatoes and onions, cooking the pancakes, and whisking the hollandaise were all required and our team went to work. 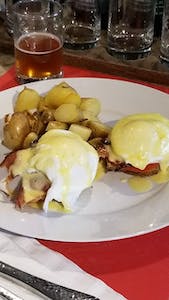 The result was a starter of mini pancakes with Vermont maple syrup, a bacon and tomato eggs benedict on cheddar biscuits, and fingerling potato home fries to accompany. We all agreed that this was a delicious and hearty meal.

After the class, we headed a short distance to visit a very special place: The Alchemist Brewery. 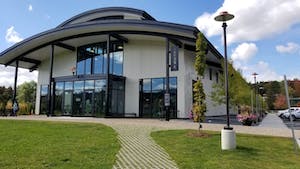 John Kimmich came to Vermont in 1994 to learn the craft beer industry from the legendary Greg Noonan as John served as the head brewer at Vermont Pub and Brewery in Burlington, VT.

It was there that he met his future wife, Jen, and together they opened The Alchemist as a 60-seat brewpub in Waterbury in November 2003. A beer called Heady Topper was an occasional offering at the brewpub. Heady Topper is a double India Pale Ale that is unfiltered and unpasteurized, clocking in at 8% ABV, but with tons of hop and citrus flavors. 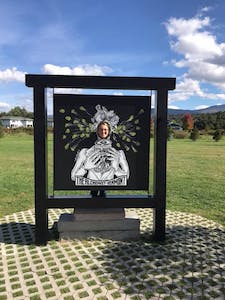 Shortly after, they made plans to build the Alchemist Cannery in a different part of town, a 15 barrel brewery and canning line solely for the production of their flagship IPA Heady Topper.

The new canning facility opened in August of 2011, and flood waters from Hurricane Irene destroyed the downtown brewpub that same month. But with the canning line in operation, they were able to stay in business and did not return to the brewpub. That brewpub location is now home to Prohibition  Pig, a noted craft beer bar.

To this day Heady Topper is brewed only in Waterbury, Vermont and is only distributed within a 25 mile radius. That brewery and canning facility is not open to the public. 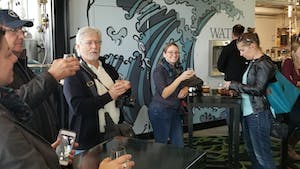 That explains the facility that we visited, the state of the art Alchemist Brewery and Visitor’s Center, opened in July 2016. It was designed to be as low impact as possible while providing the folks at the Alchemist with enough space to serve the community and the growing number of beer tourists to Vermont.

After tastes of the classic Heady topper, along with a couple of other beers brewed in Stowe, we loaded back into the vehicle to check out Mount Mansfield in a different way.

We passed through Smugglers’ Notch, which separates Mount Mansfield (the highest peak of the Green Mountains) from Spruce Peak and the Sterling Range.

Smugglers’ Notch derives its name from President Thomas Jefferson’s Embargo Act of 1807, which forbid American trade with both Great Britain and Canada. But the proximity to Montreal made it a convenient trading partner, and many Vermonters never stopped trading with Canada, sending goods and herding livestock through the Notch. 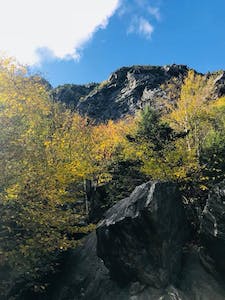 The route was improved to accommodate automobile traffic in 1922, and that provided a convenient route for liquor to be brought in from Canada during the Prohibition years.

Our next stop was not a brewery, but rather a family owned and operated farm that also features Bowden Valley Winery. 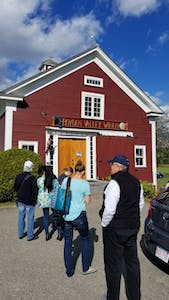 The Boyden family has been farming the 800 acres of land in the valley for over 100 years. Frederick and Phila Boyden purchased the farm in 1914 alongside their nine children with only 28 head of dairy cows. Two of those sons, Winfred and Sterns helped to maintain the farm and eventually Winfred’s son Fred Boyden took over the farm with his wife Diancy in the 1970s.

Today, Fred and Diancy’s children, David, Mark and Stephanie Boyden continue to cultivate the land with beef cattle, organic corn, hay, soy beans, a sugarbush with around 10,000 taps, a wedding barn, and a vineyard with cold climate grapes, rhubarb, and a winery. 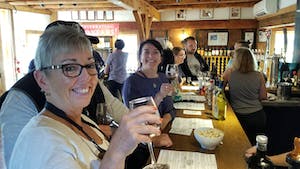 Boyden Valley Winery was one of the first licensed wineries in Vermont. David and Linda Boyden were pioneers in the wine industry using newly cultivated winter-hardy hybrid grapes from Minnesota and planting their first vines in 1996.

While they waited for the first grape harvest, they began to craft fruit wines and created some of their most iconic varieties including Boyden’s Cranberry Wine. Their fruit wine roots inspired many of the partnerships still maintained today with other local Vermont farms and foster a philosophy of sustainability on the farm.

The short break from beer was appreciated by all, but it was time to head back to Stowe by once again passing through Smugglers’ Notch.

We decided to make a brief visit to the largest brewery in Stowe, von Trapp Brewery.

One of the most famous families in the history of skiing, the real life Trapps were fictionalized in one of the most popular movies of all time, The Sound of Music. The movie ended with the Trapp family fleeing over the Alps to escape the Nazi menace, but in real life the story has continued for more than half a century.

The Trapps ended up in Stowe, Vt., and The Trapp Family Lodge started with 27 rooms in 1950 and eventually grew into a full-service, 2,500-acre resort, which was rebuilt to its current size in 1980 after a massive fire, and is still owned by the Trapps. 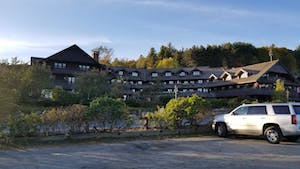 The family has always been innovative, and the resort opened the very first Nordic (cross country skiing) center in the country, and years later, was the first to install snowmaking.

Over the course of many visits to Austria, Johannes von Trapp, the youngest son of Maria and the Baron, gained an appreciation for the crisp, clean Austrian lager beers. For two decades Johannes dreamed of building an Austrian-style brewery at the Trapp Family Lodge, and in 2010 that dream came to fruition. 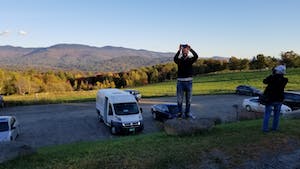 More recently Sam von Trapp, representing the younger generation, has been guiding the family into the food business with a maple syrup label, a craft brewery launched in a small space in 2010, and the Von Trapp Farmstead, a farm producing award-winning artisanal cheeses, fresh milk and whey-fed pork.

The initial humble brewery with capacity for 2,000 barrels per year attracted attention under the name Trapp Lager, and the brewery received requests from all over the United States. The von Trapp family, who had always been reticent to commercialize their family heritage, realized that they had a product deserving of the family name. 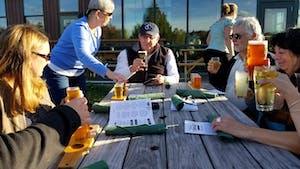 The new facility, completed in 2015 under the name von Trapp Brewing, allowed the family to expand beyond their home territory and spread the gospel of craft lagers.

One year ago they opened the Bierhall, a new brewery facility for the family label and a large restaurant that utilizes many of the home-grown products.

We then headed to our final location for the day, a visit with Will Gilson of Idletyme Brewing Company. 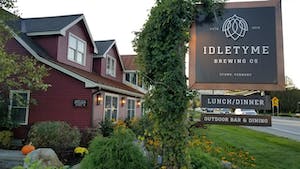 Built in 1830 as a blacksmith shop, our home has had quite a history. From cider mill to youth hostel to the Idletyme Camp and famed Shed Restaurant.

Stowe residents took over the Crop Bistro and Brewery in May of 2015, and in November of that year reopened the space as Idletyme Brewing Company. 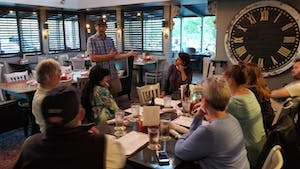 Head brewer Will Gilson has had stints at Moat Mountain and The Alchemist after brewing out west for a long time. His 20 years of experience helps this company turn out Bavarian-style and other styles of beer from the German-sourced brewhouse equipment.

Will sat down with us to talk about the business of beer, and also show us around the ground-level brewhouse and the basement fermentation space. 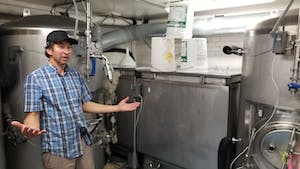 Armed with new beer knowledge, the group was ready for a night on their own and dinner with their new friends from the tour.