Brew England: Woodstock, VT and then back to Boston

Our group left Stowe to return back to Boston where we started from. But not without having a few more Vermont experiences, and visiting the second-largest craft brewing company in the United States.

That’s what happened on the last day on the Brew England tour, an itinerary that is offered as part of American Experiences presented by TourMappers North America.

Checking out one last time from another great lodging property, we took a group picture and reluctantly left the Topnotch Resort in Stowe to head south. 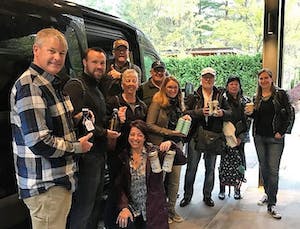 I had one surprise in store for the group, a stop at Cold Hollow Cider Mill in Waterbury.

The Cold Hollow Cider Mill is one of Vermont’s most popular attractions. The sweet smell of cider donuts warmly greeted us as we entered the front door. We saw that the shelves of their country store featured Vermont specialty foods and products, and a couple of purchases were made.

The focus of their operation is making pure apple cider year-round with a traditional rack and cloth press built in the 1920s that we saw in operation during our brief visit. 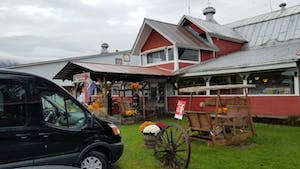 With a dozen fresh cider donuts now on board, we headed down to visit the historic village of Woodstock, VT.

The Vermont General Assembly met here in 1807 before moving the next year to the new capital at Montpelier. Waterfalls in the Ottauquechee River provided water power to operate mills. This led to tremendous growth in the manufacturing sector, and the Industrial Revolution helped the town grow prosperous.

The nearby Billings Farm and Museum includes an operating dairy farm and a restored 1890 farmhouse that was owned by Laurance Rockefeller and his wife Mary French Rockefeller. 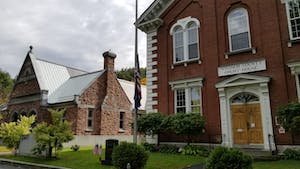 We parked along the Green that contains many restored late Georgian, Federal Style, and Greek Revival houses. And then we did our part to contribute to the major economy now in town, tourism. 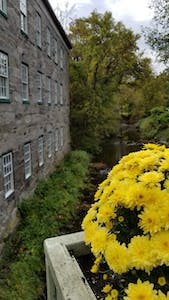 After some time walking around the village, we headed back to where our journey began almost one week prior — Boston, Massachusetts.

There was only one way to cap off the amazing week that we had together, and that was to visit Boston Beer Company in Jamaica Plain and learn more about the background of Samuel Adams beer. 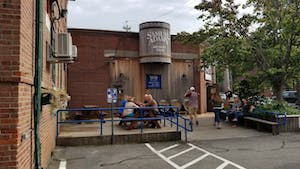 Not everyone knows the history of the world famous company, so we took it from the beginning.

The Boston Beer Company was founded in 1984 by James “Jim” Koch and Rhonda Kallman. Koch, following in his family’s brewing footsteps, famously brewed his first batch of Boston Lager in his kitchen.

At the time, Koch was working at Boston Consulting Group after receiving BA, MBA and JD degrees from Harvard University. While serving in his role as a manufacturing consultant, Koch developed a business plan for a locally focused beer company.

He invested $100,000 of his own money and raised additional funds from investors, family members, and friends including former classmates and colleagues. Boston Beer Company’s initial beer offering was Samuel Adams Boston Lager, a 4.8% abv amber or Vienna lager.

Initially, Koch rented excess capacity and brewed the beer at the Pittsburgh Brewing Company, best known for their Iron City brand of beer. In the fall of 1985, Samuel Adams was voted “Best Beer in America” at the Great American Beer Festival. 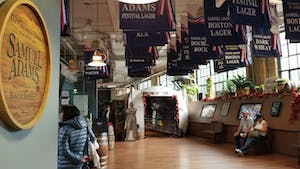 As sales increased Koch developed other contract arrangements at various brewing facilities with excess capacity. In 1997, Jim Koch returned to his hometown of Cincinnati to purchase the Hudepohl-Schoenling Brewery, where his father apprenticed in the 1940s. This was an important step the company took to reduce reliance on contract brewing.

The location that we visited was previously the Haffenreffer Brewery in Jamaica Plain, and Boston Beer Company has maintained a research and development brewery here since 1988 for updates and improvements to the brand’s offerings. 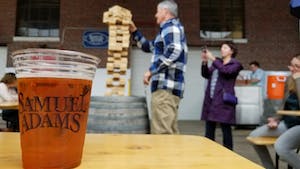 After a taste test session, we all gathered in the beer garden to enjoy a pint of Samuel Adams offerings. One last round of cornhole was enjoyed, a final game of Jenga was played, and then a group toast to salute our tremendous trip. 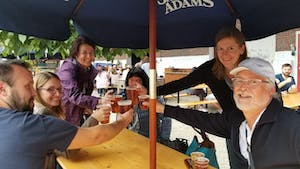 We hope that you enjoyed hearing about our adventures in Brew England as much as we enjoyed experiencing them first-hand. Cheers!

Don Littlefield of The Maine Brew Bus and Mass Brew Bus led a week-long tour of the Beaches, Bluffs, and Beers of Brew England for TourMappers North America. Click here if you are interested in learning more about upcoming American Experiences tours around the United States, including New England dates for 2018 itineraries.